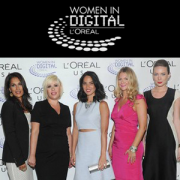 The 3rd year of L’Oréal’s Next Generation Awards had an unstoppable buzz! Female entrepreneurs and various techies gathered at Three Sixty Degrees for an evening of support and admiration for the next generation of the beauty industry’s ambassadors. The three winners of the 2014 Awards are Dr. Cynthia Breazeal (Jibo), Tania Yuki (Shareablee) and Victoria Eisner (GLAMSQUAD). Paper lists were not invited 😉

Taste of Tennis 2014, NYC AALC Inspiration Awards Gala
Scroll to top
This site uses cookies to assist with navigation and your ability to provide feedback, analyze your use of our products and services, assist with our promotional and marketing efforts, and provide content from third parties. Please click “accept” to continue.Accept Reject
Privacy & Cookies Policy
Necessary Always Enabled